The equation becomes even more complex with hyperthreading, which "virtualizes" multiple processors for each physical core. Hyperthreading can improve the number of sites per host that a VoltDB server can support. But again, not in direct proportion to a non-hyperthreaded server.

In general, VoltDB performs best with between 4 and 16 sites per host. However, you should never exceed 24 sites per host, even if the number of processor cores might support more, because the processing required to manage so many sites begins to conflict with the data processing.

The easiest way to determine the optimal number of sites per host is by testing, or benchmarking, against the target application. The process for determining the correct number of sites for a specific hardware configuration is as follows: 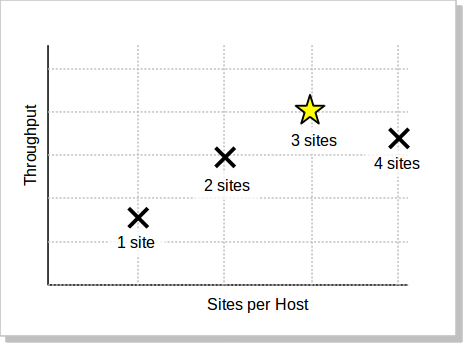 By graphing the relationship between throughput and partitions using a benchmark application, it is possible to maximize database performance for the specific hardware configuration you will be using.